Meriam's and Noura's stories or why getting married is such a big decision for women in the UAE. 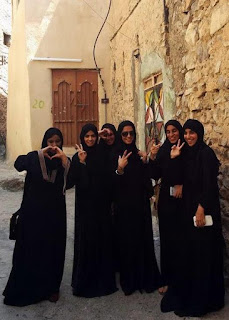 I met Meriam and Noura through mutual friends. Meriam is a thirty-something Emirati woman and a successful businesswoman, living in the UAE’s capital. After pursuing higher education in Abu Dhabi, she travelled the world and is familiar with both the western and Emirati lifestyle. Like most Emirati ladies she looks traditional on the outside because she has to wear an abbaya and a scarf -called shaila – to cover her hair. But appearances are misleading.


Unlike most women here, Meriam is not at all afraid to broach sensitive subjects and to discuss topics which are considered taboo in the UAE. especially when talking to a non-Emirati. Throughout our conversation in the lobby of a posh hotel, her loosely attached shaila kept uncovering her beautiful dark hair.


She told me that although her journey hasn’t been easy and the fact that she had to make some big sacrifices along the way, she is very proud to be an Emirati woman today:


“It’s great. I have the freedom I want. I own my own business, I travel abroad and earn my living. Women of my generation have so much more freedom than the previous generations.”


Whilst tradition still plays a major role in the lives of young Emirati men and women, major societal changes are taking place. Because most girls (about 95 %) pursue higher education, they discover a newfound freedom, travel abroad for their studies and gain financial independence.


“I don’t need a husband. I can take care of myself”, confirms Meriam.


Traditionally, marriages in the UAE are arranged by the families. But nowadays, young women wait longer and longer to get married or stay single altogether.


“Most of my female friends prefer not to get married”, Meriam states. “Many of them are lawyers and doctors. For those who marry, their marriage often ends in divorce. The problem is that men and women don’t know each other well enough before they get married.”


As young Emirati women are gaining more independence, they also aren’t willing to put up with anything anymore. When they discover that their husband has an affair or when he wants to marry another woman (men are legally allowed to have more than one wife according to sharia law), they file for divorce. That’s why so many couples split up a couple of months into their marriage”, says Meriam.


Only four decades ago, the UAE was a land of desert inhabited by Bedouin tribes, where people made a living out of camel farming, date harvesting and fishing. Nowadays, the young nation, which celebrates its 45th anniversary this year, has a modern urban society, and is a vibrant melting pot of nationalities and ethnicities. This leads to an exposure to different lifestyles.
Noura traveled to the UK to study and met her later to be British husband Ian over there. When I met her at her place, she looked like any young woman, dressed in jeans and a top and with her hair uncovered.

Although it is much more common for Emirati men to marry foreign women, according to Gulf News and the UAE National Bureau of Statistics, the number of Emirati women marrying foreigners is on the rise - by 15 per cent between 2009 and 2010. Noura is one of those Emirati women who chose her husband herself, something which is virtually impossible in the UAE.


Despite its modern appearance, society is still governed by sharia law, and the patriarchal rules which hold many challenges for women.
Meriam says one of the  key problems is the fact that it is illegal for men and women to live together before marriage, which means they cannot get to know each other. This law applies in the same way to the locals – as the Emirati are commonly referred to and who only make up 10 % of the population - as to the overwhelming majority of expats living in the UAE. Sexual relations outside of marriage are punishable by law, which makes dating very complicated. But for Emirati women, there is also the obligation to stay a virgin until they marry, even for modern women like Meriam.


Coming from a conservative family, Meriam gradually conquered her freedom, making sure as she set up her own business, that her family/father trusted her well enough to let her work together with men as well as women, and travel abroad on her own. After a while, she was allowed to travel alone without a guardian (which is normally required for Emirati women). “My family saw how committed I was. Also, I didn’t make bad use of my freedom”.


Noura later returned permanently to the UAE with her British husband, so that Noura, an engineer, could find work more easily and take advantage of the benefits afforded to Emirati nationals. However, couples like them (where the husband is a foreigner) face problems because of the patriarchal way in which society is organized. According to the law, women cannot transfer their nationality to their husband. Ian will therefore always be a stranger, whereas his children will get the UAE-nationality, an “absurd” situation according to Noura.


As for Meriam, who is able to succeed professionally but says she feels she has to sacrifice her personal life, she states that if she would find the “right man”, she would love to get married and have children. But the risk is too high: “I have all my rights. Why would I risk losing everything by getting married?”
According to the sharia, the husband decides whether his wife is allowed to work or travel or not.


But even in the very conservative environment that is the UAE, an inevitable transformation is taking place, and it’s women like Meriam and Noura driving it forward. The ever higher number of women who don’t want to get married is becoming a challenge for this small country, counting only 1.5 million nationals.
Recent studies suggest that as much as 30 % of women in the UAE prefer to stay single or are divorced. But is Emirati society ready to grant women more rights, so they can reach their full potential and have a life-work balance? There seems to be a big discrepancy between the Emirati traditions and what women want. “We have higher expectations of marriage. Emirati men like to take care of women. For instance, they open the door for you when you are entering a building or a car. This is their way of showing respect towards women. But we don’t need to be taken care of”.
Slowly but steadily, women are making their marks on society. The UAE seem to be at a turning point. Thanks to government programs women are promoted in leading positions ( the UAE has for instance 8 women in the national government out of 22 ministers). Many Emirati women are businesswomen who are thinking bigger and bigger. But just how long will they continue to sacrifice their personal lives? These are some of the stakes for the future of this young country.

Picture: a group of Emirati girls on a trip to Oman.